Skip to content
Home
Chaplaincy
Poland’s Rebirth as a Free Nation Should Inspire Us All.
Chaplaincy
The estimated reading time is 2 minutes

And the children of Israel did evil in the sight of the Lord, and the Lord delivered them into the hand of Midian seven years. Judges 6:1.

Recently, I saw my wife’s ninety-nine-year-old Grandfather, Ryszard Polanski, presented with the Knight’s Cross of the Order of the Rebirth of Poland by officials representing the President of Poland, His Excellency Andrzej Duda. Ryszard was born in the east of Poland and intended to train as a teacher, but he was forced to flee the Communist invasion of 1939 as Stalin’s murderers rounded up any young men who might lead a resistance.

Arriving in the United Kingdom as a refugee, he joined the Free Polish Navy and saw action at the Battle of the Denmark Strait as a gunner on the ORP Piorun whose Captain broadcast the defiant
message.

Trzy salwy na czesc Polski – three salvos in honour of Poland – as it fired on the Bismarck. Unable to return to his home after the War, annexed and confiscated by the Soviet Union, and unwelcome in Communist Poland, his life in his adopted country – marriage, children, work – is a testament to the virtues of resilience, decency and responsibility in a hostile world. 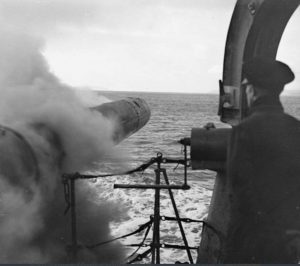 I first met a Polish person way back in in 1987. A student friend had been given the job of showing two Polish young farmers around Belfast and I was invited along because I had a car. We took them to a supermarket called ‘West-Side Stores’ on the Falls Road side of Broadway, where Stewarts and Crazy-Prices used to sell their short-dated produce to pyjama- wearing women from West Belfast, hung-over students and unfussy bargain hunters.

The Poles were astonished at the variety of the goods and at the high prices, by their standards, which less well-off people were able to afford. Later, I talked to anti-Communist Polish student leaders – I was a delegate to the European People’s Party student’s group (the EDS) at the time – as they recounted their experience of Poland’s long nightmare of tyranny: terror at the hands of the Hitlerites, the Stalinists and finally the, dreary and hopeless, final decades of Communism. I watched – on one occasion with my own eyes, in person – the dawn of the day of freedom in eastern Europe, which began in Poland at the end of the 1980s.

Poland’s bright rebirth as an independent nation after so many years in the darkness, its accession to the EU and its vigour in defending its interests within the EU should be a comfort to those of us who foresee that faithful Christians on the island of Ireland will be increasingly oppressed.

Even today, we live in places where freedoms of conscience, religious expression, assembly and speech are marginalised and where society, after a brief moment of freedom in the 1990s, is Establishing a persecuting secular sectarianism every bit as careless of personal liberty as any 17 th century Theocracy.

As the Book of Judges testifies from out of the deep past, under God the affairs of this world move in cycles. The politics which today leads to our precious liberties being undermined, may some day turn again to matters of freedom so long as we keep our own faith, preserve our commitment to the civil and religious liberty of all and remember the golden heritage of freedom to which all of us on this island are the heirs.